We analyze the stability of the ball motion with linear deviation dynamics (see impact location deviation example on the stability page). The real dynamics of a ball bouncing on a plate are nonlinear, however. Nonlinear dynamics are more difficult to analyze, but also more interesting than linear dynamics. In this section, we discuss some properties of nonlinear dynamical systems that we also observe in experiments with the Blind Juggler.

An excellent book, which covers the material discussed here in greater detail, is Steven Strogatz’s “Nonlinear Dynamics and Chaos”.

The linear dynamics we consider on the stability page are 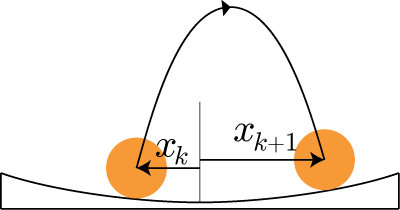 Let’s analyze the linear dynamics in more detail. First, we find values of for which a sequence remains constant. That means for all , the value of does not change. We find that the only that fulfills the equation is . This specific point where the remains constant is called a fixed point of the system. We can also find this point plotting the equation on a graph. Below, we show the linear system dynamics for a range of values of 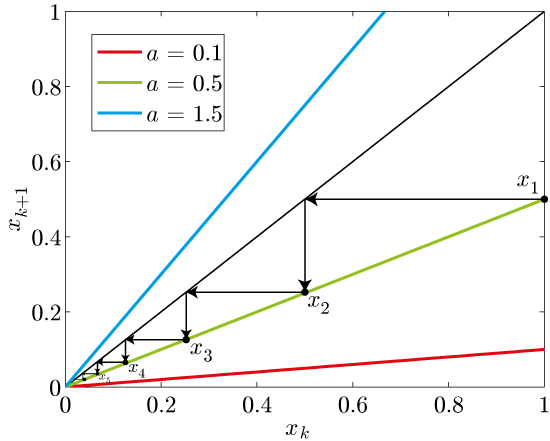 On the lower axis, the impact location at the -th impact is shown. We can look up what the next impact location is by finding the value of a colored line on the left, vertical axis. Each color corresponds to a different and describes a different dynamical system. The blue line, for example, corresponds to the equation . The thin black line is where . We can use this line to find the fixed point, which is where the black line intersects with the colored line. The intersection is clearly at for all .

We can also use the black line to visualize how the system evolves over time. Let’s see how that works out for the green system dynamics, where . We start with and find the point on the green line for which . This point is also marked in the figure with . To find the next value of , we draw a horizontal arrow from the point to the black line, and then add a vertical arrow back to the green line. That gets us to . Doing this over and over again, we realize that we will approach , the fixed point of the system. This is because the fixed point 0 is stable for , since is smaller than one. We discuss this fact in more detail at the end of the stability analysis.

As an aside: set , and the line describing the system dynamics coincides with the black line. Therefore, any is a fixed point and therefore the system has an infinite number of fixed points.

As an example, we analyze one of the most famous nonlinear systems, the logistic map. The logistic map can model population growth in biology. You may read more about it here.The system dynamics are

These dynamics do not look that much more complicated, but they can get very interesting depending on the number you choose for . The system is quite straightforward to analyze with the graphical method: 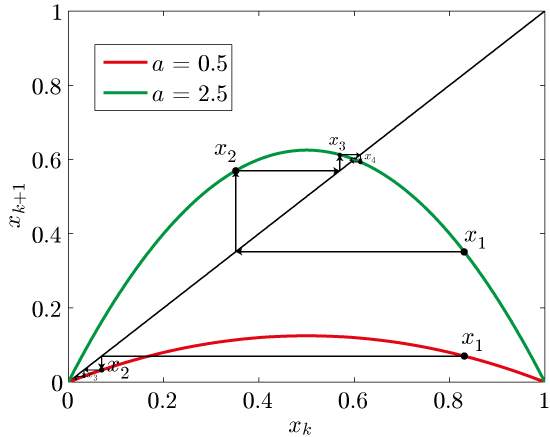 We show the system dynamics for two different values of . The red system has a fixed point at , and we find that this fixed point is stable for any starting value we pick in the interval from 0 to 1. The green curve is where things get interesting: If we check the curve for intersections with the black line, we realize that the green system has two fixed points. It intersects at and . Nonlinear systems can have multiple fixed points. The system evolution for the green system, starting at the same value as the red system, shows that the value quickly gets close to the fixed point at 0.6, and then starts spiraling in to the fixed point. Let’s have a closer look at this spiraling:

Back to the example, we find that the approximated system (red, dashed) has the dynamics

Since -0.5 is not smaller than -1, the linear, approximated dynamics are stable  (see the stability page why larger than -1 is key). Immediately, we also see why the fixed point at 0 of the green system is unstable: The green line is well above the black line. The black line corresponds to linear system dynamics with , where stable linear systems turn unstable. Therefore, we see that the linearized green system at the 0 fixed point has an that is larger than 1, which indicates that this fixed point is unstable.

Now things get even more interesting. We set , and analyze the resulting dynamics: 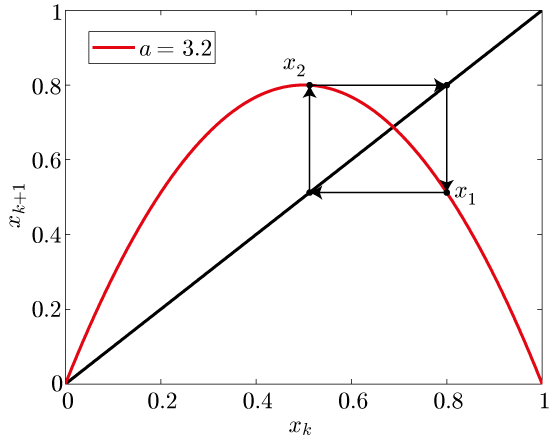 There are still two fixed points. However, it turns out that if you check their linearized dynamics, both fixed points are unstable. However, we can find another kind of stable system behavior: If we start the system at , switches back and forth between 0.8 and 0.51. These two values represent a periodic orbit of the system. We write the following equation for this orbit:

With the Blind Juggler, we can also find multiple stable periodic orbits.

The behavior of the nonlinear system changes dramatically when we change the parameter , very much in contrast to the linear system dynamics, where the parameter just determines stability of the single fixed point at zero. The changing system dynamics may well be captured with a Bifurcation Diagram. Basically, we plot all the values of that lie on a stable orbit for a given system parameter . We obtain the following figure (taken from Wikipedia, click for large version): 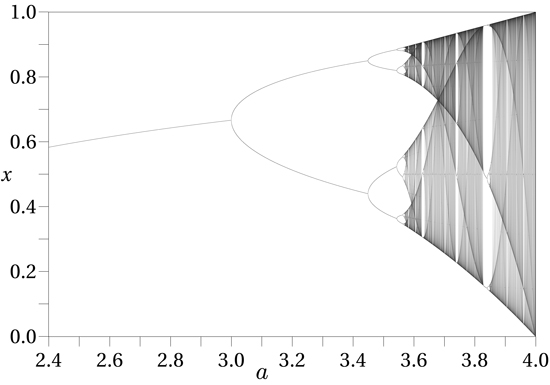 For every , we search the values of that are part of a stable periodic orbit of the system. Then, we mark all these points with a black dot. For example, recall the dynamics for , we found a single stable fixed point at . Now check the above figure: If you go up from the location on the bottom axis where , you will hit the black line exactly at . That means that if we increase from 2.4 to 2.8, the fixed point also increases, from slightly below 0.6 to about 0.65.

You can also see that strange things begin to happen as gets larger. Between 2.4 and 3.0, things are not yet very special; there is only a single stable fixed point. At about 3.0, the fixed point turns into a stable periodic orbit of period two (if you look at the shape of the curve there, it is also clear why this phenomenon is called a bifurcation). At about 3.45, the stable periodic orbit of period two turns into a four-periodic orbit. Further along, we find an 8 period orbit, then 16, and so on, until at about 3.6, the system goes completely bananas: it is now chaotic.

The system is locally unstable: If you start the system from two values that are very close to each other, that small difference is amplified and the system quickly evolves very differently for the two starting values (this is illustrated below). 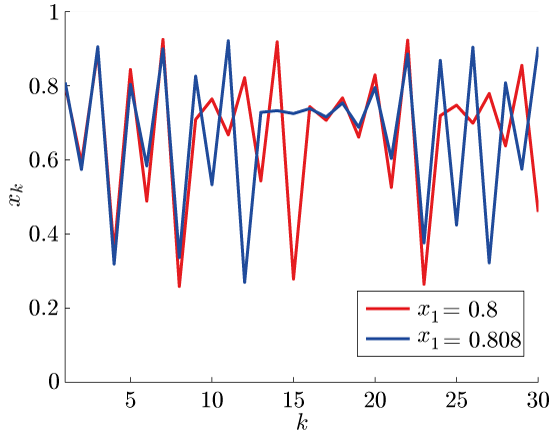 The figure shows the system evolution of the logistic map (a = 3.7) for two starting values that are very close to each other. The blue starting value is just one percent larger than the red starting value, but the system quickly evolves very differently.

While the system is locally unstable, the system state does not get arbitrarily large, and remains near a specific set of values called the strange attractor. In the Bifurcation Diagram above, you see that for , the system won’t take any value between 0 and 1 as the system evolves. You will only find values that are black. These black values reveal the strange attractor. It is called an attractor because this black set of values for is stable: if the system starts close to this set (for example at 0.1), it quickly converges to that set of values. This is the same notion of stability as before with the periodic orbits, except that the “stable” motion is now more complicated. The word strange in the name stems from the fact that the set of system states that defines the strange attractor is usually not of integer dimension. Such a set could for example be neither a line (dimension 1), nor a plane (dimenison 2), but something in between. These sets are called fractals.

Chaos can be very well visualized with the Cloverleaf Blind Juggler. Check out the chaos page!