A ball bouncing on an actuated paddle may seem like a rather simple dynamical system, but it exhibits very rich behavior. For example, the ball motions become chaotic when the paddle motions reach higher frequencies. It is important to note that the paddle motion is deterministic, and not chaotic – only the balls exhibit chaotic behavior. This is illustrated in the following video:

Two key properties of chaos are well visualized in the video:

The following illustration depicts the strange attractor of the chaotic ball motions. Every black dot corresponds to a measured ball height and velocity. The values are measured when the paddle is at the lowest point of the motion that induces chaotic ball motion (see video to watch this paddle motion). The attractive nature of the black set means that if a ball starts outside the black set, for example at the red cross, it quickly converges to the black set. At the same time there is the local instability: if two balls are very close to each other on the black set, they very quickly diverge from each other. This is a key property we use for controlling balls to desired juggling patterns, read more about this here. 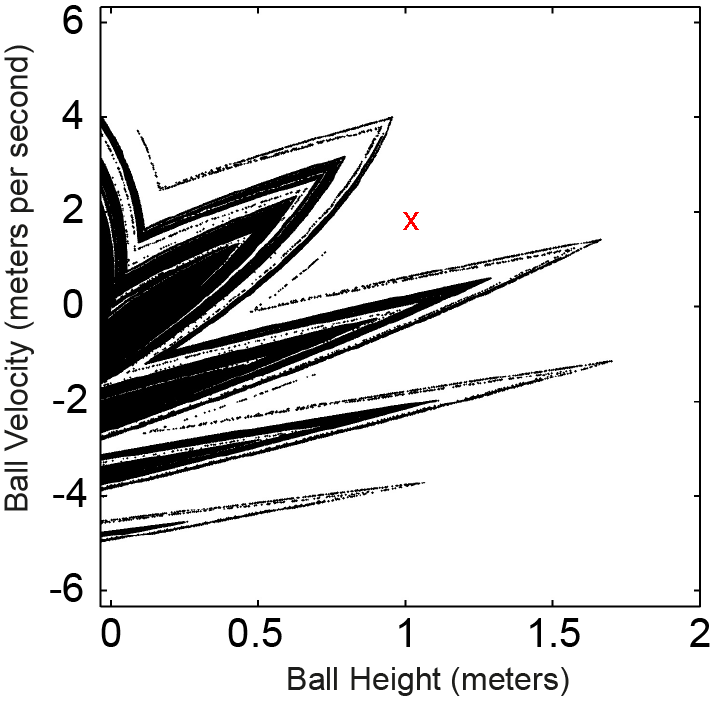